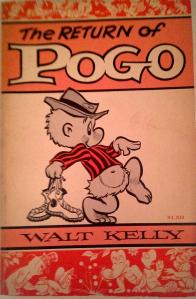 As a child, Pogo

was one of those comic strips that looked really funny but was hard for me to figure out. Sort of like Funky Winkerbean. But, then again, how could an 8-year old appreciate the social and politic satire of Walt Kelly?

Kelly is an under-appreciated part of American cultural history who inspired many including Gary Trudeau of Doonesbury, Jim Henson, and Robert Crumb. The comic strip ran from 1949 until Kelly’s death in 1973. It features Pogo the Possum as the central character, the straight man, surrounded by a motley crew of colorful anthropomorphic animals each representing a recognizable aspect of the human condition. Kelly used his characters and wit to unmask the hypocrisy of political figures such as Joe McCarthy (renamed “Simple Malarkey”) and expose the dangers of the ultra-conservative John Birch Society (or “Jack Acid Society” — say it aloud a few times).

His best known line is “we have seen the enemy and he is us”. If you have never done so, read Pogo and learn more about Walt Kelly. His comics offer an entertaining walk-through of 20th century politics and social issues. 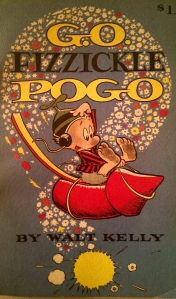 Before Olivia Newton-John, Pogo told us to Go Fizzickle.

So what’s the connection to Lois Nettleton? Lois has at least seven Pogo books in her collection, likely acquired during her relationship with Jean Shepherd

. Now, I’m not an expert on Shepherd. For expertise, you should check out this site. But there are parallels between Kelly and Shepherd — a subversive sense of humor and a genius for story-telling. Both were truly great humorists of the 20th century.

There is also an interesting connection to the beat poets with whom Jean was friends. The back cover of one of the Pogo books makes this link. 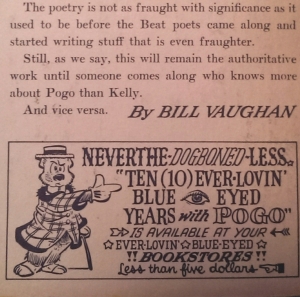 The Beat poets picked up where Walk Kelly left off — questioning authority and eschewing conformity.

Here’s one other bit of Lois-Pogo trivia. Lois was good friends with the actress Dolores Hart, who famously dated Elvis and left Hollywood to become a nun. Lois and Mother Dolores remained friends until the end. During her starlet days, Dolores Hart owned a dog named Pogo. He is mentioned in Mother Dolores terrific new autobiography, The Ear of the Heart

Many thanks to Eugene B. Bergmann’s (author of the excellent Excelsior, You Fathead! The Art and Enigma of Jean Shepherd) and Jim Clavin of flicklives.com for their encouragement and kind words. Both Eugene and Jim are great resources. Check them out.

Until next time, stay cool.